Bull Trap: Everything You Should Know 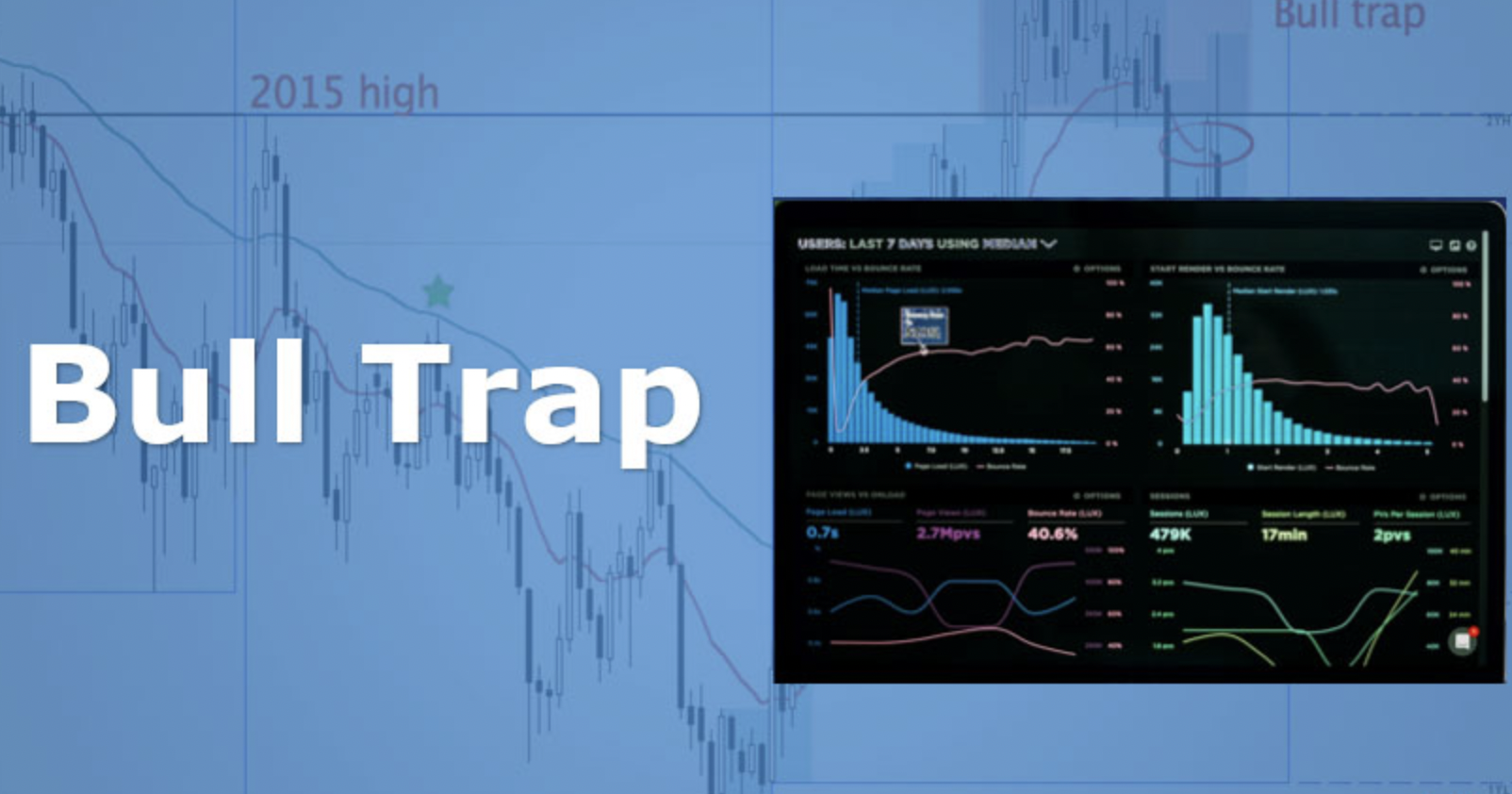 The sport of basketball has the head fake, and football fans are undoubtedly acquainted with the flea flicker and Statue of Liberty plays. Similar to what football announcers may refer to as "trickeration," markets have their forms of ruses. One example is the bull trap, often known as the suckers' rally.

What is a bull trap, then? A bull trap deceives some traders into believing that a market or an individual stock price has stopped declining and that it is an excellent time to buy. The price quickly resumes its downward trend, trapping buyers in a money-losing situation. In many respects, it is the reverse of a "bear trap," which can deceive traders into selling too early during a bull market.

On June 14, 2022, the S&P 500 Index (SPX) entered its first bear market since March 2020, the month in which COVID-19 shutdowns began. As a result, an understanding of bull and bear traps became imperative.

Solid and rapid rallies frequently follow Bear markets and steep, broad-based declines. How and when can investors determine whether price increases are genuine and sustainable or only a mirage? Here are a few essentials.

What Exactly is a Bull Trap?

A bull trap is a reversal against a positive trend that drives long traders to quit their positions as their losses increase. It is referred to as a trap because it frequently catches traders off guard and follows a strong market rally that appears likely to continue.

Bull traps are characterized by traders or investors purchasing an asset as it surpasses a historically high level of resistance. Higher highs follow most breakouts above resistance, but a bull trap is characterized by a swift negative reversal following the breakout.

A bull trap happens when a trader or investor purchases an asset that breaks out over a resistance level; this is a systematic approach based on technical analysis. Despite substantial gains following most breakouts, the security could swiftly reverse direction. These situations are referred regarded as "bull traps" because traders and investors who purchased the breakout are "stuck" in the deal.

Investors and traders can avoid bull traps by seeking confirmations after a breakout. Following a breakout, a trader may look for above-average volume and bullish candlesticks to confirm that the price will likely increase. A breakthrough with low volume and indecisive candlesticks, such as a Doji star, may indicate a bull trap.

Bull traps occur psychologically when bulls fail to support a rally above a breakout level, possibly due to a lack of momentum and profit-taking. Bears may use the opportunity to sell a share if they observe divergences, which result in prices falling below resistance levels and triggering stop-loss orders.

The easiest method to avoid bull traps is to anticipate warning indications, such as low volume breakouts, and to abandon the trade as soon as possible if a bull trap is detected. Stop-loss orders can be helpful in certain situations, significantly if the market is changing rapidly, to prevent emotion from influencing decisions.

Example of a Bull Trap

In this example, the security declines and reaches a new 52-week bottom before recovering abruptly on high volume and gaining traction against trendline resistance. Numerous traders and investors jump on the trend in anticipation of a breakout over the trendline's barrier, but the security reverses at resistance and falls abruptly from these levels. Without strong risk management measures, novice bulls can be trapped in extended trades and experience quick losses.

The trader or investor could have avoided the bull trap by waiting for a breakout to occur before purchasing the security, or at the very least, by placing a stop-loss order right below the breakout level.

What Causes Bull Traps to Occur?

After a market decline looks to have run its course, bull traps may emerge. In the aftermath of sharp drops, investors are frequently eager to secure an early seat on the ride back up, buy at what appears to be a discount price, and pick a bottom.

These first purchasing impulses may push prices above specific chart levels, and these "breakouts" may stimulate additional buying. However, such breaks may be deceptive indications, and the price may soon resume its downward trend.

How Does a Bull Trap Function?

Bull traps develop for various causes, and it might be challenging to identify a single cause.

One explanation for bull traps is that bullish investors observe a stock they favor hitting a low price. These investors determine it is time to purchase shares at a perceived discount to their intrinsic worth.

Demand from these investors, together with short sellers repurchasing their shares, contributes to an increase in the stock price. As it climbs, additional investors may fear missing out on possible gains and begin purchasing shares, contributing to future price increases.

Once the price of a stock climbs above a certain threshold, investors who kept shares during the slump may decide to sell while they still have the opportunity. This raises the supply of shares relative to demand and causes the downward trend to resume.

It is difficult to recognize a bull trap since, after a breakout, an asset's price is likely to rise, not fall. Nonetheless, you can conduct technical and fundamental analysis on the item you intend to trade.

What It Implies for Private Investors

Investors who trade individual assets or frequently rebalance their portfolios should be looking for bull traps. You may purchase shares at what you perceive to be a bargain price, only to discover that they continue to lose value.

Bull traps can be complicated to see compared to a genuine reversal in a security's price trend. Some analysts advise keeping an eye on companies that are reversing a price trend but have limited trade volume or if they break above their moving-average price. These are two popular technical signs that could indicate a bull trap.

If you are concerned about falling victim to a bull trap, place a stop-loss on your position so your broker will sell it before the asset's price falls too far.

In the end, it may be prudent to avoid market timing and instead invest in long-term investments or more diversified products, such as mutual funds.

How does psychology factor into bull traps?

First, purchasers frequently seek to initiate a trade at the first indication of a price increase. Because there is little evidence of a substantial, sustainable rise to the higher, these traders may be more prone to "stuck." They are buying based on a small amount of evidence – the price moving above resistance – but primarily on hope as the breakout proves to be fake.

When these buyers realize that there will be no other buyers, psychology also comes into play. As selling commences, traders who have just purchased may panic and sell, lowering the price.

Price action is just the manifestation of bullish and bearish activities taken by individuals. Price action may result in people making trades based on fear of missing out (FOMO), greed, anxiety, and other emotions, in addition to well-researched tactics, statistics, and experience.

How Can a Bull Trap Be Traded?

The lesson of the bull trap is that buying at the first possible indication of a fresh advance might be risky. Because there is minimal overall buying pressure, many of these attempts to advance may fail.

When a trade goes against them, some investors may make hasty decisions that have a major impact on the market. This phenomenon is known as "stuck traders" and can be exploited in certain situations.

As the price goes above a resistance level or prior swing high inside a downtrend, you may want to watch for bull traps and consider placing a short position if the price begins to dip below the prior swing high.

Here are some potential steps you could take:

How to Escape a Bull Trap

As soon as you enter a bull trap, setting a stop-loss order on your position is best. This will assist you in avoiding heavy losses if you fall victim to a bull trap.

There are a number of stop-loss strategies to choose from, including traditional, trailing, and guaranteed. The use of a trailing stop, which will lag behind the current market value by a certain amount and close your position promptly if the market value falls by that amount, is likely to be the most helpful when attempting to avoid a bull trap. By doing so, you can protect your profits and minimize your losses in the event of a bull trap.

Bull trap vs. Bear trap: What is the difference?

Typically, a bear trap happens during an overall uptrend. The asset's price may face a short-term downturn, falling below a support level, prompting investors to sell existing long positions or initiate short positions. If there are insufficient sellers to sustain the downward pace, buyers may drive the price higher.

Those who shorted may become stranded in a losing trade and be forced to buy in order to exit, while those who sold may have buyer's remorse and desire to buy again, driving the price higher.

What Is a Bull Trap in the Cryptocurrency Market?

Bull traps, also known as "dead cat bounce," are frequently observed in crypto due to their rapid recovery.

Bull traps function similarly in cryptocurrency markets as in conventional markets. For example, if the price of an altcoin has been consistently increasing over the previous few days, you may feel that the trend will continue. You purchase some and then wait for the price to rise so that you can sell it for a profit.

However, the contrary occurs, and you find yourself in a position of disadvantage. You observe the downturn and then wait for a positive reversal to buy the dip, believing you are acquiring the asset at an attractive price. The trap is revealed when the price retreats and resumes its downward trend.

What is the difference between dead cat bounce and bull trap?

A dead cat bounce is any price change during a significant downward trend. A bull trap typically involves technical aspects, such as the price exceeding a previous resistance level, which sets up the trap. A dead cat bounce may exhibit features similar to those of a bull trap. Learn more about dead cat bounces in trading.

A bull trap is bullish or bearish?

A bull trap is bullish in the short term but bearish in the long term. The bull trap attracts buyers, resulting in a temporary price increase, selling pressure, and a price decline. Learn more about bear and bull markets.

How can one mitigate danger when trapped in a bull trap?

Stop-loss orders may be utilized to mitigate risk when trading in a bull trap. This order will end the trade if a predetermined quantity of money is lost or a predetermined price is reached. Consider the location size as well. Greater risk and reward possibilities are associated with larger position sizes than smaller ones.

A bull trap is a trend reversal that occurs quickly after an asset breaches a historical resistance level. In a bull trap, a breakout above resistance does not necessarily guarantee that the prevailing trend will continue. A breakout over resistance could be interpreted by traders as a tip to go long and purchase the underlying market. If so, bear traps could cause a trader to lose money when the price declines after starting an extended position. Stop-losses, particularly trailing stops, can assist you in avoiding bear traps and their detrimental impact on trading gains.